Chicken Manchurian is a very popular Indo-Chinese dish. Crispy fried chicken pieces are tossed in a sweet and savoury sauce and served alongside fried rice or noodles.

WHAT IS CHICKEN MANCHURIAN?

Chicken Manchurian is an Indo-Chinese dish with fried chicken in a hot and sweet dark-red sauce. It’s an entirely restaurant born and propagated dish, and it has all sorts of variations such as Gobi Manchurian, Paneer Manchurian, a dry version, a saucy version, and so on.

Despite its name, Chicken Manchurian is not Chinese, nor does it come from what was historically known as Manchuria, China. Chicken Manchurian was actually invented by Nelson Wang, an Indian restaurateur of Chinese origin. As Wang himself noted, “What is Manchurian? Nothing! I made it up. There is not even a proper cuisine called Manchurian.”

Having traveled to Pakistan recently, I noticed a clear difference between the Chicken Manchurian there vs here in the U.S.

Pakistani-style Manchurian is wading in red sauce, and the chicken is only slightly crispy with a cornstarch-only batter.
Indo-Pak restaurant Manchurian is almost always crispy (flour is involved) and only lightly coated in sauce. Like Chicken Shashlik and Chicken Jalfrezi, Manchurian here is often accompanied with cubed red and green bell peppers and onions.

This recipe has 3 components:

My marinade is adapted from Kenji’s latest book, The Wok. To develop his chicken coating recipe, he tried out several batters to see which would result in the crispiest chicken.

Vegetable or Chicken Stock: The first ingredient used to make it extra saucy and to add depth of flavor. I use store-bought vegetable stock, but chicken stock can’t hurt.
Tomato purée or tomato sauce: The second ingredient that adds sauce without making it overtly ketchupy. This is the runny kind that comes in a can or jar, but isn’t thick like tomato paste.
Ketchup: I use Hunt’s Natural or Heinz Organic. (Other awesome recipes that use ketchup: Stovetop Chicken Thighs and Chicken Shashlik.)

WHAT TO SERVE WITH CHICKEN MANCHURIAN 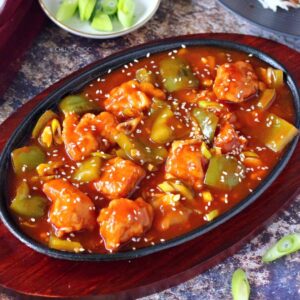